Landlord Mistakes: How to Be Held Hostage by Your Tenant

This is a guest post from Debbie Vornholt of Common Sense Landlording.

Today's article is on landlord mistakes, and I have a story for you.

It’s the first of the month, and I had a tenant that I just love named Bob come in to pay his rent.  Bob is a commercial tenant of ours that has a successful tattoo parlor, but he also rents a house from another landlord.  We were talking about business, and he said he just loved renting a house because he just called the landlord to fix things.

This drives me crazy!

Bob is a smart guy, he has great credit, a great income and he needs to buy a house!  At any rate, I digress from the story.  His house is in a great area of town with good schools. It has 3 bedrooms, 2 bathrooms, a basement, a 3 car detached garage and a large corner lot that is fenced.  He loves it!

To run a profitable rental business, don't allow yourself to be held hostage by your tenants.

When Bob rented the house it was mid-November three and half years ago, and he was looking at four other houses at the time. When he showed up to view the house he currently lives in, the owner told him that the last tenant had just moved the previous week and they really needed to get this house rented right away. The landlord actually said that they needed the rent money to pay the mortgage every month; they were really strapped right now since they had to make the payment themselves for the month.

Now Bob is a very smart guy and knew right away he was in control.

The owner told him the rent was $1,350 a month, the security deposit was the same and the application fee was $50.  He went on to say that they had cleaned the carpets but hadn’t painted all of the rooms, just some of them.

When Bob told the owner he didn’t want to pay more than a $1,000 a month, and he had four others to look at they looked panicked.  He said they told him they couldn’t take less than $1,350 and he thanked them for their time.  When Bob got in his car and started to back out, they ran out and told him that if he signed the lease today, he had a deal.  This was pretty much the “mac daddy” of landlord mistakes, and it set the stage for every interaction with this tenant going forward.

These landlords were desperate to rent their home and they told the prospective tenant this.  They let him know that they needed the money now (desperation), they came down on the price by a lot (a big hit to their bottom line) and didn’t run his credit (big mistake).

Now, they got very, very lucky because this guy is a great tenant and he always pays his rent either on or before the first day of the month.  Bob has never been late paying his commercial rent either.

The story gets even better for the tenant and even worse for the landlord.  I don’t know whether to congratulate my tenant or get the number for his landlords and chew them out!

The landlord sent him a rent increase letter three months ago and informed him that his rent was increasing $100 in sixty days.  Bob had been thinking about moving to another state just across the river to be near friends when he got the rent increase letter. He told me he said to them, “Sorry, but I was thinking about moving anyway so I’m out.  When would you like me to be out?”

Bob told me it was just a house and he didn’t care where he lived so it was no big deal to him.  He also didn’t see any reason why he should pay more to live there since they hadn’t fixed up the house that great to begin with. He had also made several improvements to the house out of his pocket.

Well, they apparently freaked out and told him they wouldn’t increase the rent. Since he had already decided he was moving, he told them no thanks. This was the push he needed to get moving. They freaked out again and lowered the rent another $100.

Never forget this is a Business

I can hear many of you out there saying the landlords made the right decision.  After all, a vacant house costs money to clean up and re-rent.  Many of you may have done the same thing to keep a good paying tenant in the home.

However, many more of you are probably screaming “What!”  After all, the government and your insurance company aren’t going to lower the value of your home, decrease your taxes and your insurance won’t go down just because you are not getting less rent for your house.  No way!  They are going to keep increasing every year because it is business as usual.

Don’t get me wrong. I sympathize with the landlords.  I really do get where they are coming from. But as difficult as it may be, this is a business decision!

They caused this entire situation all by themselves because they made several landlord mistakes when they first met him and rented to him.

Now they are probably sitting at home alternately congratulating themselves on not losing a tenant but freaking out because now not only are they not getting $100 more a month, they are getting $100 less every single month!

First of all, never ever tell any prospective tenants your financial situation.

These people lost control of their financial future and gave Bob the keys to lock them up and hold them hostage.  He is a very nice guy but he is also a very smart guy.  It wasn’t his intent to cheat them but when he pushed, they caved.

Don’t get into the “desperate, I must rent now” mindset because you will shoot yourself in the foot every single time!  The person you are talking to now isn’t going to be the last person you will talk to about the house. There is always someone else!

If you decide to lower your rent, don’t do it just because a tenant asks.  Do it because you figured out that you priced it a little too high and lower it before you show up to meet a prospective tenant.  When you set the price for the house, assuming you have spent the time and money to fix it up, the rent amount should not be negotiable under normal circumstances.

I strongly recommend that you raise your rents every single year!  It doesn’t have to a $100 but even $15, $20 or $25 isn’t a huge hit to anyone’s wallet and it will train your tenant to expect the rent to increase every single year.  Keep in mind that if you steeply discount the rent initially, chances are that you will not be able to recoup this in a year or two because you will cause the tenant to move.

When you decide to raise the rents, always give at least sixty days’ notice and stick to it!  If you cave in and don’t do the increase, your tenant will be controlling your financial destiny.  Groceries go up, gas goes up, utilities go up and rent goes up!  It is not unreasonable nor should it be unexpected.

Check out this article on “How to Deal With Tenants that Never Pay On Time”.  Thanks to Debbie Vornholt of Common Sense Landlording for another great article on how to run a profitable rental business without all of the headaches. 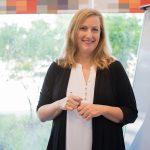 Debbie has worked in real estate related fields for over 25 years. She is currently a property manager for a company that has a portfolio of hundreds of residential and commercial properties. Debbie believes that you need to have systems and policies for running your business (and keeping your sanity).

She has some great landlord stories over on her site so be sure to stop by her blog Common Sense Landlording when you have a chance. While you're there be sure to pick up her free tenant screening form for landlords.

Be sure to stop by and say hi on Facebook at Commonsense Landlording.

Have you subscribed to the blog?  If not be sure to do that today so you don’t miss any of the business building tips I have coming your way. I want this year to be your best year ever!  And if you enjoyed this article, please share it.