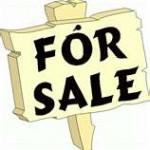 When the holidays come around (at least where I live), it seems like most real estate investors hunker down and take about a month off. I had two closings just before Christmas, which left me with two more houses to sell. Now that’s a good problem! One house is in a popular area not too far from downtown that young couples love. The other house is one that I call the really ugly yellow siding house.

As we headed into the holidays, I sent emails to my regular buyers list. It was difficult to even get anyone to drive out to the houses to look at them. They had a lot of excuses such as I have too many houses, all my money is tied up, my dog needs to go to the groomer, grandma is in town and she is sick, etc, etc, etc. I also listed the houses on Craig’s List. I got some calls but really not too many. Since I was not having any luck driving traffic to the houses, I decided to go back to the tried and true; bandit signs.

Well, I did it again! I got my phone ringing off the hook by putting out handwritten bandit signs in the areas where my two houses are located. I want to thank Steph Davis once again for that tip. I hired an older teenager to put out about 35 signs in one area about a week ago. Then I bought a friend lunch one day and got her to help me put out about 10 signs in one particular area. Not only is she a good friend, but she is tall which was quite helpful for putting up signs. I wanted to put these out personally, because this area is within the city limits and is more prone to having problems with the code officials. By choosing carefully where I put them, they are still out 1 week later. Typically I get my signs online. But this time I called around and found the signs locally for $1.25 a sign.

I still have folks calling me daily about the houses. The yellow siding house has been one of the hardest houses to sell that I have ever tried to sell. This house is really ugly! It’s so ugly that sometimes folks don’t even stop when they see it. You would think seasoned real estate investors would be able to picture the house with new siding wouldn’t you? Even after lowering the price substantially, I’m not having any luck. I’m open to suggestions if anyone has some.

The next time you have a house to sell, try using handwritten bandit signs. They work great for selling houses and building your buyers list. I do have one final thought, and that is you may get some interesting calls by writing “Handyman Special” on the signs. Last time I used the signs I got 3 calls wanting to know what kind of tools I had to sell. I’m really not sure where that thought came from. Today I got a call that was even funnier. A lady called that said her father was a handyman. She said that he needed work and was wondering what made a handyman “special”.