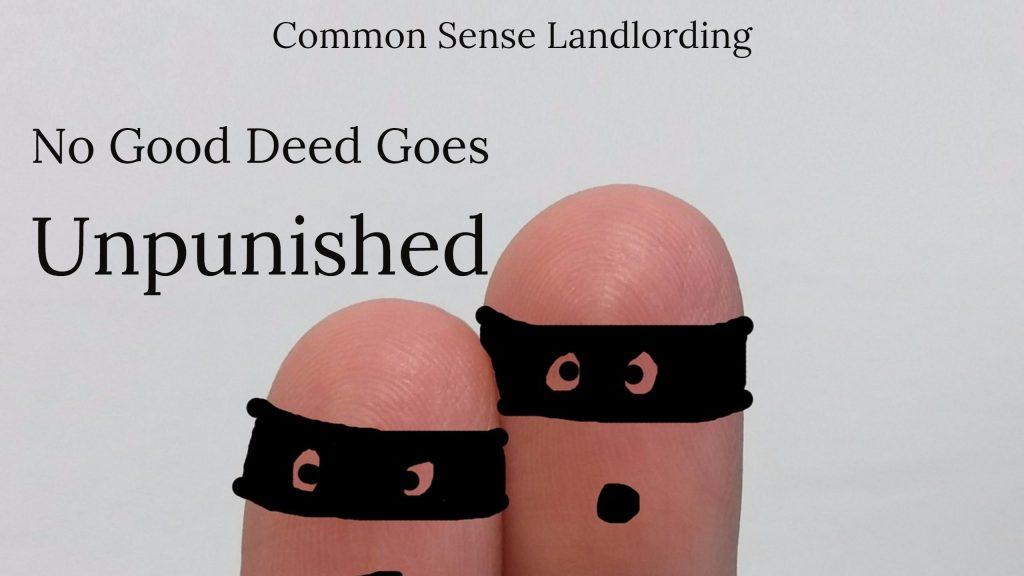 Today I have another guest post on landlord mistakes from Debbie Vornholt of Commonsense Landlording. Today’s article is “No Good Deed Goes Unpunished”. It's a case study on why you shouldn’t break your own rules, and the consequences for the landlord if you do.

Any landlord will tell you that if you have been in this business long enough, you will eventually break one of your rules and do something you shouldn’t do.  It happens to all of us at one time or another.  The difference between the smart, successful landlord and the stressed out, losing money landlord is that the first one learns from his or her mistakes and doesn’t do it again.

Think twice before doing tenants a favor if you’re deviating from your own policies.

Sigh.  A couple of years ago, we had a tenant that had lived in our rental for a little over two years with no issues.   She always paid on time, was nice and kept the house looking great.

That all changed two months into her third one year lease term when she started paying on average, 3 or 4 days late.  The 7 day letter was sent and late fees were charged the first two months she paid late. The third month she called and said she had lost her job but had gotten another job. Her problem was that she was behind on everything.  She asked if she could pay on the 12th and if we could possibly forgive her late fees for this one month only.  She assured the office that she would be able to get back on track and pay on time next month.

Cutting the Tenant a Break

I consulted with the property owner and he agreed only because she had been such a great tenant.  He really liked her and didn’t want to lose her.  Assuming everything had gone as she said, then this would have been a great way to help out a tenant who has fallen on hard times.

However, she didn’t pay on the 12th as she said.  In fact, she didn’t pay until the 21st of the month.  She apologized profusely, paid the rent (minus the late fees as agreed) thanked us and left the office.

The next month rolled around and when she hadn’t paid the 7 day letter went out again.  She called the office and acted surprised that we hadn’t gotten her rent.  She said she mailed it on the 2nd at a mail box near her house.  According to her, she had the receipts and would call and get them replaced.

Giving Her another Chance

We told her to get us a copy of the receipts for our records.  Although we sent out the 7 day notice, we didn’t call in the eviction because money orders have failed to reach the office in the past.  They usually only take about two weeks to come back but can take four to six weeks.

At any rate, four weeks later, the money orders had not come in and she swore that she had turned them in for replacement.  She was reminded again to provide us with a copy of the money orders for our records.

The Next Month Rolls Around…

So, we are already into the next month and guess what?

She hasn’t paid that month’s rent either, so another 7 day letter was mailed.  We didn’t take off the late fees, because we hadn’t gotten the replacement money orders. Plus, she had late fees for this month as well.

The tenant called the office a couple of days later when she received that latest 7 day letter and proceeded to chew me out.  While screaming into the phone, she demanded to know why she was charged late fees for the previous month and for this month.  It was her understanding that ALL of her late fees were going to be waived.

Side note:   This is where the office made a mistake.  In hindsight, we should have had her sign something stating the terms of our agreement with her but we didn’t.

Now we have a tenant who thinks for some reason that we agreed to waive her late fees forever!  I am still trying to figure that one out to this day. I explained that we rarely agree to waive late fees, and we only made the exception once to help her get back on her feet.  Furthermore, she still hadn’t given the office a copy of her receipts for the lost money orders so we had no way to verify that she had even bought them.  I explained to her that we don’t remove late fees until we get copies of the receipts and we actually receive the replacement money orders.

The Tears Turn into Anger

There was a long silence and I actually thought she had hung up on me.  Then I hear her sobbing on the other end of the phone.  She said she couldn’t find her receipts so she couldn’t get them replaced and she had lost her new job.  I told her I was sorry to hear that and I had to tell her that I would be forced to call in the eviction.

Well, she stopped crying really fast and then started cussing me out.  According to her, it was my fault that I hadn’t gotten her money orders in the first place, and she shouldn’t have to have them replaced. She informed me that I would just have to give her credit for them since she did pay!  She also informed me that I would be removing all of her late fees and she demanded to speak to the actual landlord.

As it so happened, the owner was in the office and had been listening to the phone call.  He was mad both at her for pulling this stunt, and at himself for giving her a chance.

We strongly suspected that she had made up the story about the lost money orders and highly doubted that she had ever purchased them.  The bottom line is that it is the tenant’s job to get money to the rental office and if they purchase money orders, it is their responsibility to hang onto the receipts.

The owner told her that he had no intention of giving her credit for her “lost” money orders and the late fees would not be removed.  She ended up hanging up on him, thank goodness!

What a Show at Eviction Court

I called the eviction attorney, got a court date and got on with my day.  We use an eviction attorney so we don’t have to show up in court.  He called the office after the court date and told us that the tenant showed up at the hearing. She put on quite a show yelling about how we stole her money orders and didn’t give her credit. Luckily, our attorney has a sense of humor and just laughed.  Apparently the judge wasn’t so happy with her. In the end, she lost and moved out a few days later.

There’s Always Something Else

She did send us a wonderful letter that we received the day after she moved out.  In her letter, she informed us that we had treated her very badly and had stolen her money so she wasn’t giving us the keys back.  She also didn’t have the time or money to remove her stuff from the garage (2 ½ car detached) so we would just have to get rid of her stuff.

Remember how this story started?

It all started because we agreed to do a favor for a great tenant.

No good deed goes unpunished. You should always follow your procedures to prevent yourself from being punished.

Here's another article for you.   Don't Be Held Hostage By Your Tenant

Debbie has worked in real estate related fields for over 25 years. She is currently a property manager for a company that has a portfolio of hundreds of residential and commercial properties. Debbie believes that you need to have systems and policies for running your business (and keeping your sanity).

She has some great landlord stories over on her site so be sure to stop by her blog Common Sense Landlording when you have a chance. While you're there be sure to pick up her free tenant screening form for landlords.

Be sure top by and say hi on Facebook at Commonsense Landlording.

Have you gotten your freebies and subscribed to the blog?  If not be sure to do that today so you don’t miss any of the business building tips I have coming your way. I want this year to be your best year ever!  And if you enjoyed this article, please share it.